Nari Dana, which means “women’s wings”, is a social enterprise that has been established by CRS.

Nari Dana operates as a business. It is run separately from CRS as a limited company, legally known as Nari Dana Home Accessories Private Ltd. The women are employed and products are marketed and sold through the company.

The Nari Dana Production Centre, located next to the CRS office, was officially opened in October 2017. It is kitted out with Juki industrial sewing machines, thanks to financial support from the German Consulate of Kolkata. Women are able to come to the production centre on weekdays for as many hours as their domestic commitments allow, and are paid a fair wage for their work.

Ritu Ghosh is the Quality and Production Manager, and has been working with the women to develop different a range of products which are sold on the local market. There is regular training on offer as women develop and refine their sewing and creative skills.

In summer 2019, a new sales outlet for Nari Dana products was opened at Bishop’s House. There are plans to open additional production centres in other CRS locations so that some of the women do not have to travel so far across the city. 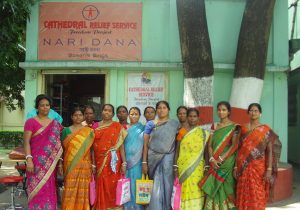 How it all started

The Nari Dana project was inspired by teaming up with Veronica, a former product manager from the UK textile industry. She runs an online business called Tabitha Living, which sells high-quality products made by women from poor and disadvantaged backgrounds, who are employed and paid a fair wage.

The vision is for Nari Dana to become one of Tabitha Living’s partner organisations and suppliers. When Veronica visited Kolkata in November 2014, about 140 women from the slums came to meet her, all of whom were eager to take part in the project. That was how Nari Dana was born.