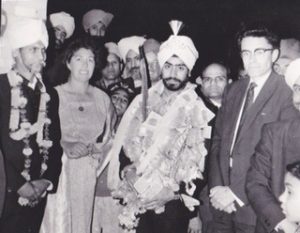 We are very pleased to report that a substantial bequest has been left to the CRS under the will of Mrs Patricia Payne, who passed away on 15th July 2015. Pat and her husband John, shown in picture attending a wedding, lived in various cities in Pakistan and India over a 17 year period. During their posting in Calcutta, Pat worked as a teacher at the Cathedral School. They both retained an abiding love for the two countries and Pat kindly remembered CRS in her will.

The UK Friends of CRS are managing the bequest. To date, an initial payment of £107,000 has been received with a further amount of around £40,000 expected when the estate has been fully wound up. The bequest is being treated by the Trustees as a capital sum to be invested in the long term and ensure the future viability of CRS. Read full press release