Bibibagan is located just to the east of the centre of Kolkata and not far from the major railway station at Sealdah. It is a busy and congested area of the city with crowded residential areas.

A short distance away is Tangra, the heart of the city’s leather industry. The associated industries offer some employment for people from the community, particularly for men in slaughter houses and meat packaging units.

Women and children are often forced to augment family incomes by taking jobs in the nearby leather factories. There are also jobs in plastic processing units but this exposes workers to plastic fumes and dangerous particles that cause widespread respiratory problems.

The population of the area is about 15,000 (1,200 families), of which 6,000 are children. All of the families are Muslim. The community is poor with very low literacy levels, a lack of vocational skills and large numbers of youth.

CRS got involved in this community after the communal riots between Hindus and Muslims which were prompted by the destruction of the Babri Masjid in 1992. An education and skill training programme was started in partnership with the Taj Youth Sports Club in 1992. With a growth in student numbers, the activities moved to Mollajan Social and Welfare Club in 2005. In 2012 the adjacent premises belonging to Awami Committee Club were added for use by the education programme and beautician class. Today CRS supports about 300 families. 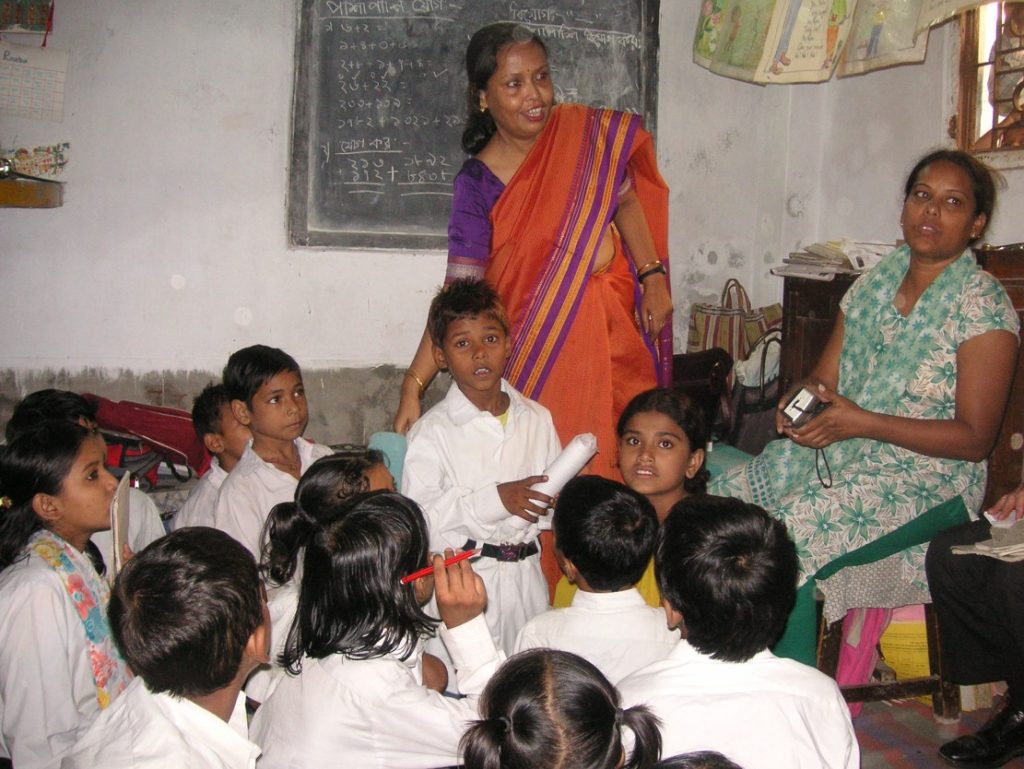 The education programme is for pre-primary age children (3 to 5 years). About 100 children currently attend the sessions. The curriculum is based on ‘joyful learning’ methods and there is an emphasis on dance, music and drawing. The aim is to ensure that these children get a chance to be enrolled into government primary schools. CRS helps each child to open a bank account and they are encouraged to save money.

The women’s empowerment programme offers training in tailoring, embroidery and beautician skills and other needs-based training.

Once they have completed their courses students are encouraged to form self-help groups, such as the Women’s Empowerment Group (WEG), and establish income generating activities. Some former students have joined CRS’s Nari Dana project.

The health programme offers a school health clinic once a month with a doctor’s check-up and the distribution of medicines. Many of the school children receive iron supplements for iron deficiency anaemia. Referrals are made to government hospitals when necessary.

Awareness camps are held in the community to spread messages about good health and hygiene. Health camps are also held in collaboration with other agencies targeting particular health issues.

“I have not been able to walk or move my hands ever since I can remember. My parents used to carry me around everywhere. I could not even go to the bathroom on my own. I felt very sad and alone because I could never leave the house when my friends used to go out and play. Now all that has changed since the CRS didis took me to a big hospital and gave me a wheelchair. These days I go out to the nearby grounds when they play. I even went to see the Victoria Memorial with my parents in my wheelchair!”

“I have a sister and two brothers. We were raised by our grandmother because our parents died when we were very young. It was a big struggle for her to provide and care for us all. But she made sure that we all went to the CRS school at Bibibagan. When she became too ill to work we took on the responsibilities for earning money and cooking food. Now I am 18 years old. I work as a domestic helper but I am still studying. I love listening to music and drawing.”

Support is needed to continue helping the community at Bibibagan. Funds are needed to cover the costs of the midday meals for children, medicines for the clinic and iron deficiency anaemia campaign, training materials for the school and skills training programme, and counselling for children with problems. It is hoped to start an environment project to raise awareness about care for the environment and living sustainably. The Mollajan Social and Welfare Club premises also require some renovation; in particular a new roof is needed.