Our mission is to provide education, health care and empowerment to women and children of all faiths and none, motivating them to realise their full potential through individual and collective action and change. We bring together people with different challenges to be strong and work as one to secure their rights.

History of the Cathedral Relief Service

During the Bangladesh Liberation War of 1971, which led to East Pakistan becoming the independent state of Bangladesh, an estimated 10 million refugees fled from the conflict zone over the border into India. Most went to the nearest city – Calcutta.

After the war, an estimated 1.5 million refugees stayed in India, a great proportion in Calcutta. CRS shifted its emphasis to supporting these people who lived in great poverty in the city’s slums, providing education, skills training and healthcare.

More than fifty years on, the work of CRS continues. It now operates as a development NGO with education, health care and empowerment programmes that support poor and disadvantaged communities in the slums of Calcutta (now Kolkata), and in rural villages in the states of West Bengal and Jharkhand.

The work of CRS is focused on city slums in metropolitan Kolkata and rural villages in the surrounding districts. Visit the Locations section to see maps and find out more.

CRS works in partnership with community-based organisations. These local committees decide what is needed, and CRS helps them to achieve it, so that it is the communities themselves which run the projects, albeit with some assistance. CRS also tries to ensure that local governing committees include women so that they can take part in local decision-making processes.

Activities are divided into three main programme areas: education, health and women’s empowerment. The overall purpose is to create an environment which will enable communities to develop into healthy and economically sustainable units. There are also special initiatives including support for young people with disabilities, continuing professional development for teachers, sport and cultural activities for children, and Nari Dana, a new business venture for women. Visit the Activities section to find out more. 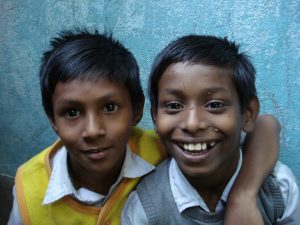 CRS exists to equip the most disadvantaged women, children and families in India to discover a brighter future. Extreme poverty brings with it a host of social problems. Alcoholism and domestic violence are a part of everyday life; prostitution and sexual abuse are common; child labour is widespread; some cultural attitudes encourage abusive relationships and a spiral of deprivation. Problems and challenges faced include low rates of literacy, inadequate educational and health facilities, low-paid employment and unemployment, and the low social status of women and girls.

Particular target groups are working children, children of sex workers, slum and street children, children with mental disabilities, young and adolescent girls, and women. However, it is recognised that the greatest benefit can be obtained if whole family units can be supported, rather than single individuals. So, for example, where a child is enrolled in a CRS education centre, his or her mother should be encouraged join a women’s empowerment group.

While CRS, by virtue of its link with St Paul’s Cathedral, is a faith-based NGO, it has no proselytising role. Beneficiaries of the organisation’s work are Hindu, Muslim, Sikh, Christian, and people of no faith at all, and no discrimination is made on the basis of faith.

CRS has a small but dedicated team of six full-time employees based at the offices in the cathedral grounds, some of whom have been involved for many years. There are four people employed on consultancy contracts, who work three days a week, one of each of whom is responsible for education, health, women’s empowerment and Nari Dana. There are three further part-time support staff.

Plus, there are the teachers, trainers, doctors and other field workers, many local, who work in the project centres.

As with the beneficiaries of CRS, members of staff in both the office and the field come from different faith backgrounds, yet all work together towards a common goal of improving the lives of poor and marginalised people.

The Cathedral Relief Service is registered as a “Society” under the laws of West Bengal and has a written constitution. As a Society it has a membership limited to sixteen people of which three (the Bishop of Kolkata, the Presbyter of St Paul’s Cathedral in Kolkata, and the CRS Director) are ex officio members. The remaining members are either appointed or elected by the members of the Society in General Meeting.

How we raise funds

There is a Friends of CRS group in the UK whose sole aim is to spread awareness and raise funds for CRS. Regular support is also received from: schools and churches of the Diocese of Derby, UK; Anglican Overseas Aid, Australia; the Lloyd George Asia Foundation, Hong Kong; the Consulate General of the Federal Republic of Germany, Kolkata; Larsen & Toubro, Kolkata; and other entities. Visit the Supporters section to see a map and find out more.