Dum Dum is an area about 10 miles north of the centre of Kolkata. It is a name known the world over as being the original home of the dum-dum bullet which was developed at the British Royal Artillery armoury in the area in the 1890s.

Dum Dum is also the location of Kolkata’s international airport which has seen considerable expansion and modernisation in recent years, along with an improvement of transport infrastructure in the area.

Located on the northern fringes of the metropolitan area, Dum Dum is also on the trunk road leading out of the city thus the area is often busy with long-distance trucks going to and coming from the northeastern parts of West Bengal and the states of northeast India.

Dum Dum is also a heavily populated residential area. Some of the poor live in densely-packed slum communities, others in precarious encampments along the embankment of a nearby canal.

While there are plenty of opportunities for employment, there is also widespread poverty and illiteracy. Employment opportunities for men include rickshaw pulling, cement mixing and bricklaying. Women are mostly employed as domestic servants. Unfortunately poverty and despair drives some people to alcoholism, a knock-on effect of which is domestic violence. 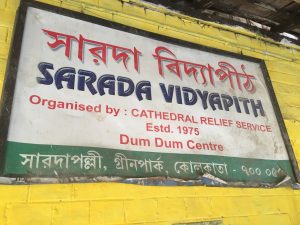 CRS began working at Bediapara, a slum situated on Jessore Road in Dum Dum in 1971 when 300 people were paralysed due to consumption of adulterated mustard oil. CRS provided medical support and food rations to each family affected. This was followed by a rehabilitation programme providing wheelchairs and rickshaws to allow disabled members of the community to be mobile and independent.

A training centre was started in 1972 providing skills in sewing and the opportunity to earn a living. An education programme was also added in 1972, which moved to the present site in 1974.

Today CRS supports about 270 families in the area. All activities are run from the school building, which has classrooms built around a large playground. CRS owns the land and has gradually improved and expanded the premises, most recently with a full renovation in 2009 thanks to a generous donation from one of the Friends. 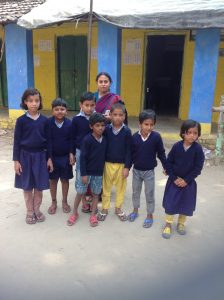 The education programme is for pre-primary and primary age children (3 to 10 years). The curriculum is based on ‘joyful learning’ methods and there is an emphasis on dance, music and drawing. The aim is to ensure that these children get a chance to be enrolled into government primary schools. A midday meal is supplied to supplement the children’s nutrition, and they also receive uniforms. Various activity clubs encourage children to participate in additional activities which include entering competitions with children from other NGOs and privileged schools. CRS helps each child to open a bank account and they are encouraged to save money.

The women’s empowerment programme offers training in tailoring, embroidery and beautician skills. Once they have completed their courses students are encouraged to form self-help groups, set up bank accounts and establish income generating activities. One successful student has set up a beauty parlour business at her home. Successful graduates of the tailoring training programme are encouraged to join Nari Dana.

The health programme offers a school and community health clinic once a month including a doctor’s check-up and the distribution of medicines. Many of the school children receive iron supplements for iron deficiency anaemia. Referrals are made to government hospitals when necessary. Awareness camps are held in the community to spread messages about good health and hygiene.

The building at Dum Dum is also used as a satellite production unit for the Nari Dana project to accommodate women who cannot commute all the way to the main production unit in the city centre.

“I came here to Dum Dum from Midnapore after my marriage. A month into my marriage I realised that my husband could barely earn a living to support me and the rest of the family. Soon he started abusing me in his bouts of alcoholic rage. I knew I had to do something. Luckily the CRS didi visited our area and spoke to me about joining the skill training course. Despite family opposition I started learning jute bag making while also taking adult literacy courses at the CRS centre. I have now completed up to Class IV and am planning to continue studies further. I have started earning an income from filling orders from the local jute factory. My husband’s and in-laws’ attitude have also changed since.”

“I grew up in a village in the Sunderbans then moved to Kolkata to find work. I was a domestic helper but I had to work long, long hours for very little money and the people sometimes tortured me. Later I moved to work for another family who gave me some freedom so I went to the CRS centre at Dum Dum and started to learn new skills. I was learning tailoring but then the family decided that I should not leave the house. So I moved out and went to live with a friend. I take orders for stitching work from neighbouring houses and also make jute bags for a nearby factory CRS. I am also in one of the CRS Self-Help Groups. Now I am independent. I can pay my rent from the money I earn and sustain myself. My life is much better now I am free.”

“I was married off when I was quite young because my parents were poor. But my husband was a bad character. To get away from him I moved to Dum Dum to live with my grandmother and uncle but they did not treat me well. I did all the cooking for them as well as working as a domestic help in six other houses. This was very tiring but I used my spare time to study. Although I am a very shy person, I have found that I can help others. I now work as a skills trainer at the Dum Dum centre and am also taking the beautician’s course. I hope to be able to support myself and be independent someday.”

Support is needed to continue this work at Dum Dum. Funds are needed to cover the costs of the children’s midday meal, educational materials, medicines for the iron deficiency anaemia campaign, and materials for the skills training. There is urgent need for a new roof and renovation works to reorganise the space to accommodate the production centre and improve toilet facilities.