Sukantanagar is located on the southern fringes of Bidhannagar, a planned satellite town developed in the late 1950s and early 1960s to accommodate the burgeoning population of Kolkata.

Bidhannagar is more popularly known as Salt Lake City as it was built in an area of marshy, shallow salt water lakes. Many were drained and the land reclaimed; other lakes were retained and are still used for fishing.

Salt Lake City is now a hub of economic and social expansion, and also home to Kolkata’s IT industry, but Sukantanagar is peripheral to the development and many families in this community are poor. The population of the area is about 3,200 (800 families), of which 500 are children. About 90 per cent of families are Hindu and the remainder Muslim.

Employment is available pulling rickshaws and driving, also in fishing. Some women work as domestic servants. Women tend to occupy an inferior position in the community and are often exploited and abused. Child marriages are common, while desertion and re-marriage often without a proper divorce leads to legal disputes concerning property in the area.

Local organisation Swami Viveknada Adarsha Shshu Bikash Sebayan has been running a school in Sukantanagar since 2006. CRS has been working in the neighbouring community of Basani Devi Colony and were invited to visit the school in 2011. They decided to support the school from 2012 and gradually expanded into a health programme and women’s empowerment programme. 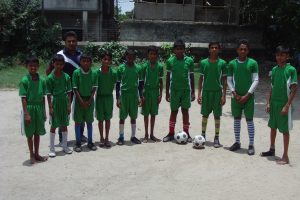 The education programme is for pre-primary and primary age children (2 ½ to 12 years).  75 children attend the sessions.  The curriculum is based on ‘joyful learning’ methods and there is an emphasis on dance, music and drawing. The aim is to ensure that these children get a chance to be enrolled into government primary schools. Children are given a midday meal to supplement their nutrition.

Various activity clubs such as the Environment Club and Shishu Jagat (Children’s World) encourage children to participate in additional activities which include entering competitions with children from other NGOs and privileged schools.

An Under 10s football team has been formed which plays against teams from other CRS Education Centres.

The women’s empowerment programme offers training in tailoring, embroidery and beautician skills and other needs-based training. Once they have completed their courses students are encouraged to form self-help groups, such as the Women’s Empowerment Group (WEG), and establish income generating activities.  Some former students have joined CRS’s Nari Dana project.

The health programme offers a monthly school health clinic and referral to government hospitals when required. Many of the school children receive iron supplements for iron deficiency anaemia. Awareness camps are held twice a month to spread messages within the community about good health and hygiene. Health camps are also held in collaboration with other agencies targeting particular health issues. Drinking water facilities have also been provided at the school.

“I am a student at Sukantanagar Sishu Sikha Niketan, a school supported by Cathedral Relief Service.  I live with my mother, father and brother. My father works as a daily labour, mother as a domestic help and my brother as an electrician. I joined this school when I was six years old in the pre-primary section, now I am in class IV. I have enjoyed my stay in this school. My best subject is Bengali, and I love painting and drawing. I was also President of the Sishu Jagat club and enjoyed all the activities undertaken by the group. I will soon be leaving the school to join another government school. With the assistance of my teachers, I had the opportunity to open my very own bank account where I can save my own money, which I want to use for my higher education. I would love to join a computer training course. When I grow big, I want to become a teacher.”

“I have undergone the tailoring training offered by CRS and passed the course in 2017. I now take small orders for making garments from within my community. This helps me to support my family, including my son who is 2 years old. I have joined the Women’s Empowerment Group and participate in meetings and other training offered by CRS. I am also part of the Nari Dana project.”

Support is needed to continue this work at Sukantanagar. Funds are needed to cover the costs of the children’s midday meal, medicines for the iron deficiency anaemia campaign, counselling for children with problems, and materials for both the school and skill training programme. The building needs some renovations including the completion of an additional classroom, repairs to the roof, and improvements to the toilet facilities.