Beside the railway tracks is Naya Bustee, a slum community of about 700 predominantly Muslim families. They were displaced from their previous settlement and ended up on this marginal site. Such people living in temporary hutments and unrecognized slums often lack rights and the access to basic services such as education, healthcare and housing.

Many families earn their livelihood through daily wage labour in activities such as road construction, or at small enterprises such as tea stalls, fruit and vegetable sales, or by pulling rickshaws. Some women and girls work as maid servants for more affluent families.

Unfortunately, alcoholism, drug dealing, violence and prostitution are rife. Children are often drawn into this world of danger and exploitation, falling victim to substance abuse, sexual abuse and physical violence. There have also been instances of children being abducted by traffickers.

A community based organization called Right Track has been working in this area for 3 decades. It started in 1988 with a group of enthusiastic social activists committed to creating a more just and equitable social environment.

Their initial work was in the port area of southwest Kolkata, combatting issues such as black marketeering and alcoholism, and helping people to settle disputes. Over time they expanded in scope and geographic location with a focus on improving the quality of life of disadvantaged children, providing healthcare and livelihood generation opportunities. Right Track has been working at Brace Bridge since 2000. 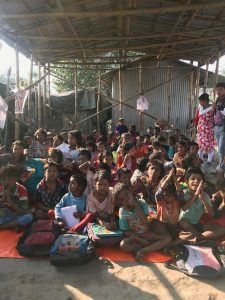 CRS became aware of the impoverished community living at Brace Bridge in spring 2018. After a six-month survey of the community and liaison with Right Track, a partnership was established in September 2018.

CRS has established an education programme focused on children of pre-primary and primary school age (3 to 13 years). More than 100 children are currently attending classes.

A women’s empowerment programme has also started. Women can receive training in skills such as sewing and embroidery and promising candidates may be able to join the Nari Dana programme.

A health programme includes a school health clinic once a month, awareness sessions in the community help to spread messages about good health and hygiene, and health camps offering testing, diagnosis and treatment for various issues.

Support is needed for CRS to support this very vulnerable community at Brace Bridge.