Canning is a town in the South 24 Parganas district of West Bengal located about 30 miles to the southeast of Kolkata metropolitan area. It was named after Lord Canning, the Governor General and Viceroy of India from 1856 to 1862.

Located on the south bank of the Matla River and part of the Sunderbans delta, it was originally called Port Canning as Lord Canning had grand plans to build a port that would be an alternative to Kolkata and a rival to Singapore. Wharves were built along a riverside strand with hotels and homes.

But the town stands just four metres above sea level and the area has always been very vulnerable to flooding as a result of cyclonic winds, waves and tidal surges. During 1867 the new port infrastructure was devastated and never rebuilt.

While the river still presents a threat to the town in the monsoon season, it completely silts up during the dry season meaning that boats cannot pull into the jetties. However the town is largely dependent on the river. Fishermen of the area bring their catch to the all-night fish market at Canning where wholesalers buy it and transport it on to Kolkata for sale.

In the rural villages around Canning most of the available work is in cultivation or day labouring. As Canning is on the railway it is also possible to commute into the city for work. However, unemployment remains high.

Most of the people of this area are poor and illiteracy is high. Residents of rural areas often struggle to access the few government health centres in the area and face greater difficulties of reaching a hospital in emergencies.

CRS has been working in Canning since 1977; it is the oldest of the projects outside the city. It started when a slum community at Tollygunge Station in Kolkata were being forced out of their homes. Mr Kamalesh Chakraborty, who worked for the railways, helped the people from this slum to relocate to a place in Ghutria Sharif.

He then got in touch with CRS who decided to support the community by opening a production centre at Sangraminagar in 1977. CRS provided a group of women with 10 sewing machines and materials to start the production of baby dresses which were then sold to local shops. In due course more girls and women of the village were trained in tailoring.

In recent years the activities have expanded to several villages within a 10 mile radius of Canning, now serving a population of around 22,000 (8,780 families), of whom 5,500 are children. An education programme was launched in 2002 in Pratragarh village. Livelihood training in tailoring and spice production began at Shaktipally village in 2003 and tailoring training was extended to women and girls in Rabindrapally village in the same year. With the success of these training and empowerment programmes, self help groups were also established. In 2008 a health centre was constructed at Sangraminagar thanks to a generous donation from the UK Friends of CRS. 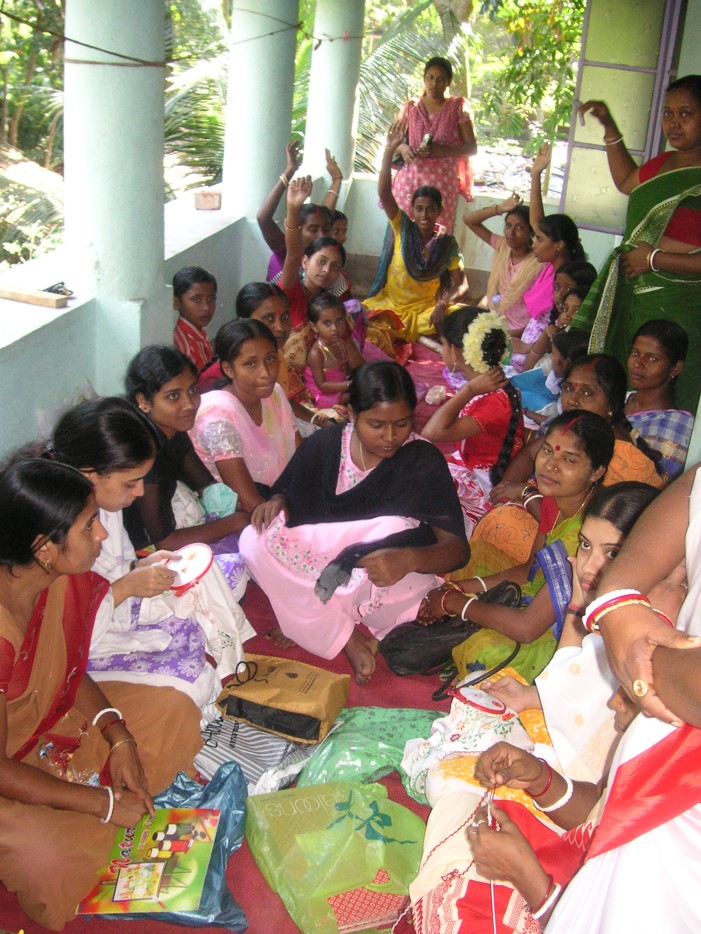 The education programme focuses on pre-primary aged children from 3 to 5. CRS funds one teacher who provides a curriculum based on ‘joyful learning’ with an emphasis on dance, music and drawing.

The women’s empowerment programme offers certificate courses in tailoring and embroidery. Women are encouraged to form self-help groups and then set up small income generating initiatives. CRS supports one teacher.

A health programme is provided via the Integrated Child Development Scheme, a government-sponsored programme to provide general health check-ups and polio vaccinations to the children of the village. The CRS multipurpose centre at Sangraminagar is used for this.

“I was at a very difficult period of my life. My son, who was the sole earning member of the family, had been diagnosed with tuberculosis. My daughter-in-law and I managed to secure jobs as domestic helpers to help support the family. But the income we earned was just not enough to feed five mouths. By the grace of God I managed to chance upon the didi running the self-help group at Sangraminagar. I saved small amounts from my earning and was finally able to take a loan of Rs 10,000 from the local bank.  I used this money to set up a small food vending cart which my daughter-in-law and I run together. I am much better off now and am even able to send my grandchild to school.”

Support is needed to continue the various programmes in these villages around Canning. Funds are needed to provide medicines and equipment to run the health centre, as well as a doctor’s honorarium to cover attendance at general and school clinics.

Training materials are needed for both the education and vocational training programmes, as well as funds to cover the costs of teachers’ honorariums.

One of the buildings housing an education and women’s programme requires renovation and all locations would benefit from electrification.