Jharkhand is the neighbouring state to West Bengal. The fourth biggest city in Jharkhand is Bokaro Steel City, a major industrial centre. This was once a remote rural area on the southern banks of the River Damodar, flanked to the north by the Parasnath hills and to the south by the Satanpur hills.

The area came to prominence when Prime Minister Jawaharlal Nehru planned to build a steel plant in the area due to the local availability of coal, iron ore and other raw materials. With the support of the Soviet Union, India’s largest steel plant was opened in 1964.

Where there were once scattered villages, a planned town was built and divided into different residential sectors. The city has expanded over the years and has schools, hospitals, parks and other public amenities.

Jharkhand is one of India’s poorest states. Many people belong to tribes and backward castes which are generally poorer and more disadvantaged communities than the rest of the population. Extreme poverty is widespread and the population scores low on all socio-economic indicators. Many people are engaged in low-income occupations, working as agricultural labourers, industrial labourers, dhobis (washermen) or domestic helps. 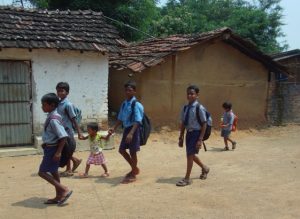 In 2006, a grassroots organisation called Sarwangin Vikas Samiti (SVS) was formed to promote the welfare and development of poor and marginalised people of the area, particularly children and women.

They established a primary school and a women’s empowerment programme comprising skill training and self-help groups supporting communities in the villages of Gumla, Kashmar and Santanpur.

CRS had always focused its work in urban Kolkata and the rural areas in the southern districts of West Bengal, but found the vision of SVS to be aligned with its own interests in supporting women and children.

CRS has been involved since 2009 supporting work in Gumla Nagar, a neighbourhood within Bokaro Steel City, and three villages which lie just outside the city: Pupunki, Satanpur and Kasmar.

In 2013, CRS provided the funding for the upgrading of the building at Gumla Nagar from a two-roomed hut made of bamboo and mud (below left) to a concrete multi-purpose premises with three individual but connected sections, as well as toilet facilities (below centre and right). This centre can withstand the annual rains and flooding so will be an important community asset for many years to come. 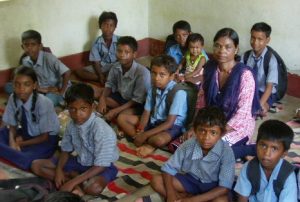 CRS supports an education programme run by SVS for pre-primary and primary age (3 to 12 years) in each of the village centres. At present around 200 children are enrolled. The curriculum is based on ‘joyful learning’ methods and there is an emphasis on dance, music and drawing. CRS provides the salaries of the teachers.

The women’s empowerment programme for women offers courses in tailoring, embroidery, bangle making and beautician skills. About 40 women and girls have received training to date. CRS pays the salary of the trainer and has supplied two machines.

The making of bangles from glass and resin has been particularly successful, with some women setting up small businesses to support their families. Some of their products are sold at a showroom in the state capital of Ranchi. Women are also encouraged to form self-help groups.

Support is needed to continue and expand this work. The vision is to provide primary education for 1,500 children, skills training for 1,200 women and healthcare for the whole community. The education and empowerment programmes require teaching materials and the costs of the teachers’ honorarium.

The hope is to expand the work into healthcare. Funding is needed for a health clinic, to cover the costs of doctor and health worker visits, and for medicines and medical equipment. A special focus needs to be on raising awareness and treating iron deficiency anaemia among women and children. Children at the school also require nutritional supplement in the form of a midday meal.

It is also hoped to establish an environment project to promote good stewardship of natural resources and the environment, and to set up a football team.