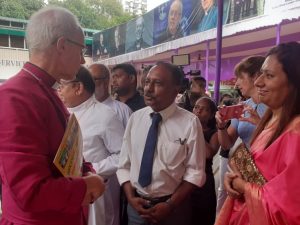 On 08 September 2019, CRS was greatly honoured by a visit from the Archbishop of Canterbury, the Most Reverend Justin Welby, who was in Kolkata during a tour of India.

After giving a message during the Sunday service at St Paul’s Cathedral, the Archbishop and his wife, Caroline, toured the cathedral grounds where the educational and social service activities of the diocese were on show. 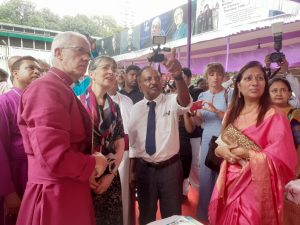 It was a great privilege for the CRS Director, Rig David, to be personally introduced to the Archbishop and his wife.

It was a wonderful opportunity to explain the work of CRS and Nari Dana. He presented them with stoles embroidered by women from Nari Dana. 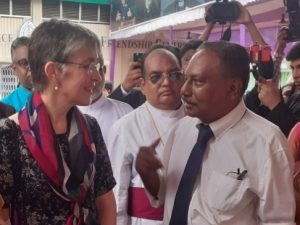 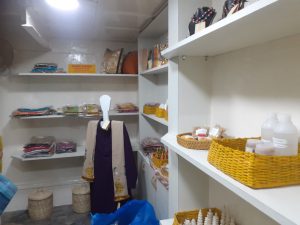 At 51 Chowringhee Road, just across from St Paul’s Cathedral, stands a spectacular colonial building. This is Bishop’s House, the official residence of the Bishop of Kolkata.

The Right Reverend Paritosh Canning, who was installed as the new Bishop in June 2019, was introduced to the work of CRS at the start of his tenure.

He was very impressed by the Nari Dana project and has generously made space in Bishop’s House for a sales outlet for Nari Dana.

A small area has been fitted out with shelves where products can be displayed. With many national and international visitors and dignitaries passing through Bishop’s House this is a great way to showcase the skills of the women of Nari Dana.

Kolkata has a new Bishop: the Right Reverend Paritosh Canning. His role includes acting as Chairman of CRS.

Bishop Canning began his tenure with a visit to the projects at G B Lane and Hastings, as well as the Nari Dana production centre. 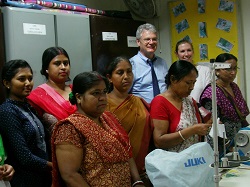 In April, the Nari Dana Production Centre welcomed visitors from Canada – Kevin Dixon, the Vice-President of Operations at International Justice Mission Canada, a global organization dedicated to protecting the poor from violence throughout the developing world. 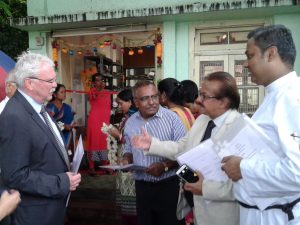 The Nari Dana Production Centre was officially opened on 20 October 2017. The Nari Dana project, CRS’s social enterprise, which employs slum women trained in sewing and embroidery to make products for sale in India and overseas, has been gathering momentum over the last few years.

There is now a dedicated space for the women to make their products, equipped with a set of new sewing machines thanks to financial support from the German Consulate of Kolkata.

The inauguration started with an opening prayer by Rev Nigel Pope, Presbyter of St Paul’s Cathedral and the Vice Chairman of CRS. Mr. Jürgen Thomas Schrod, the Deputy Consul General from the German Consulate then assisted Rev Pope in cutting the ribbon to open the centre.

This was followed by a traditional lamp lighting ceremony by the guests and members of CRS Executive Committee, signifying the ray of hope that Nari Dana brings to the lives of the women.

After Rev James Gomes, Assistant Presbyter of St Paul’s Cathedral, had blessed the new workspace, the women were delighted to show the guests a range of their products.