Climate change is exacerbating hunger in India, according to a report by the International Food Policy Research Institute. With levels in India considered to be ‘serious’ at present, it’s estimated that almost 74 million Indians will be at risk of hunger by 2030. Read the full article on the India Today website here.

CRS recently launched its nutrition programme, which aims to provide hundreds of children with a healthy, dietician-advised meal every day. The programme aims to combat hunger and a lack of nutrition among some of India’s most disadvantaged children.

With the initiative costing around £10,000 per year, the generosity of CRS supporters is vital. To find out more about the nutrition programme and how you can donate, please see our Fundraising appeals page. 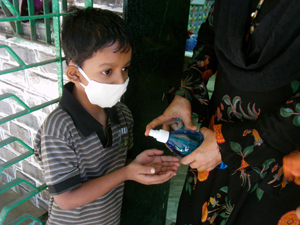 CRS centres have been equipped with resources to minimize the risk of viral spread. Children and women from the community can make use of masks and hand sanitizer, while those attending classes are given temperature checks using a forehead thermometer. 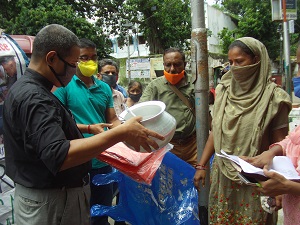 Thank you again for your generous donations! The funds were used to purchase 400 tarpaulins and 400 sets of cooking utensils for families whose homes were destroyed or damaged during Cyclone Amphan.

Distribution was delayed due to continuing pandemic lockdowns but, by the last week of August, we were able to hand out these items at our project locations at Bibibagan, Brace Bridge and Hastings. The intention is to deliver to a total of 11 CRS projects and Cathedral parishes over the coming weeks. 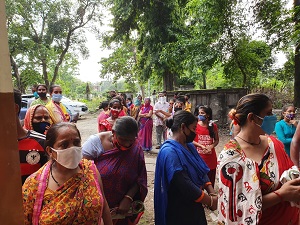 Sadly the coronavirus continues to spread In India, with more than 1 million cases now recorded. Unfortunately it is the communities already suffering from poverty and disadvantage that are most vulnerable in the present crisis.

The fundraising by supporters to our appeals for emergency food and medical supplies in response to the COVID-19 lockdown and Cyclone Amphan was remarkable. As a result, thousands of people received basic assistance in a time of great need. 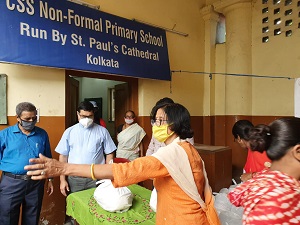 Most recently supplies were distributed at two non-formal schools located at Bhowanipur Cemetery and Scott Lane that are run by the Cathedral Social Service, a sister organization of CRS. 150 families received food packages and medicated soap.

The help given to poor communities in Kolkata and surrounding rural areas has been facilitated by CRS working in close collaboration with the Diocese of Kolkata.

The Church has been able to utilize its wide network of parishes, projects and people to reach so many needy communities. We’re also very grateful for the commitment and leadership from Bishop Paritosh, who has personally joined in many of the distribution events.

The flood waters have receded, and water and electricity supplies have largely been restored, but the damage wrought by Cyclone Amphan will take a long time to repair. With the help of partner organisations, CRS has been able to make an assessment of the damage to communities and buildings.

In Hastings and Brace Bridge, many of the families that CRS support live in makeshift shelters, and these were very severely damaged by the cyclone, leaving women and children in very vulnerable circumstances. 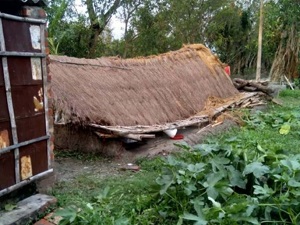 Significant damage was also sustained to houses in the slum communities at B D Colony and Bibibagan, where many families live in single-room houses with roofs made of tin.

In rural areas, where many houses have roofs made of thatch, the high winds and torrential rain caused much damage (example on right of a collapsed straw roof). The communities that CRS supports in Mahamaya and several villages in Jharkhand have reported numerous families impacted.

Overall, an estimated 1,150 families supported by CRS have been rendered partially or fully homeless. In the short term, CRS will be distributing tarpaulins and basic cooking utensils to all these families. In the longer term, these communities will need support to rebuild their homes and livelihoods. 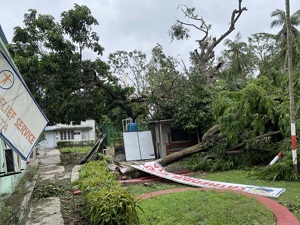 In terms of the community buildings that CRS uses in different locations, there was damage to the roof at B D Colony, Dum Dum, Bibibagan, G B Lane, Mahamaya, and Jharkhali.

Due to fallen trees and debris there was damage to the access paths and areas around the centres at Sukantanagar, Bibibagan, Dum Dum, G B Lane, and Mahamaya. Trees were also uprooted and signs blown down at the main CRS office in the campus of St Paul’s Cathedral (photo left).

The generous donations from supporters across the world to the coronavirus appeal are now being used to provide further relief for communities suffering the double blow from the lockdown and the impacts of the cyclone. If you are able to give more, all the funds will be used to help families in great need.